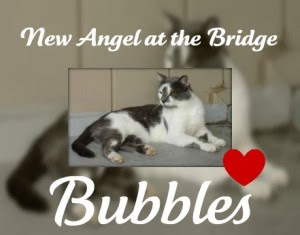 We lost another of our oldest friends today. Bubbles ran off for the bridge after being sick for a while. We are all going to miss him. Adieu sweet friend.
Posted by Motor Home Cats at 11:12 PM 7 comments:

Hey everyone. We had a miracle at our house last night. Cody has been letting Mom pet him almost every night now, and boy does he love it. He rubs on her and leans into her hand and raises his butt up into the air. And when he's done with pets, or I spook him, he takes off - but at least he's allowing Mom to pet him.

Last night, something different happened - well, actually two somethings.... Cody let Mom pet him while he was on the floor. He usually only allows pets when he comes up on the bed. The second thing that happened was truly a miracle... Cody let Mom pick him up and put him on the bed. She decided to see what would happen if she put her hand under his tummy, and she just scooped him up and put him on the bed. He didn't stay there, but he didn't fight her when she picked him up. Do you all remember what happened the last time Mom picked him up??? See here and here.
Mom is glad he let her pick him up without going ballistic. She is hoping that she can keep picking him up and maybe one day get him to the v-e-t for a check-up. Since he's always been so feral - he's not been since he had his hoohaectomy. Fortunately, we're indoor only cats, and he's been healthy.
Posted by Motor Home Cats at 5:16 PM 11 comments: 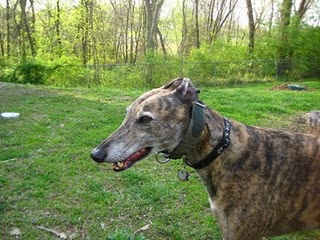 We are so sad. One of our friends had to go to the bridge today. He was a greyhound who lived with his mommy and daddy and grey-sister, Scout in Missouri. Jack loved camping, playing with Scout, and watching Judge Judy. He broke his leg today and when they took him to the vet, it was discovered that he had cancer that had spread throughout his body. We are crying that he's gone, and know his family will miss him terribly as will we. Goodbye Jack - have fun running at the bridge with Camie.
Posted by Motor Home Cats at 4:04 PM 12 comments: 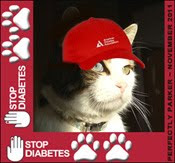 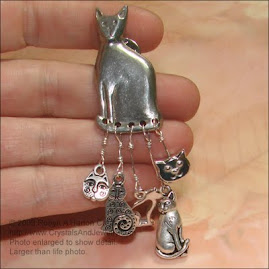 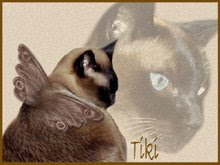 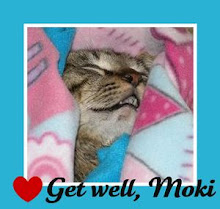 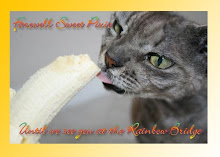 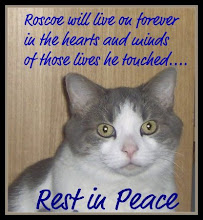 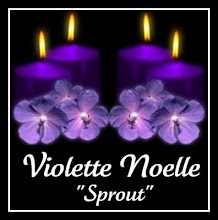 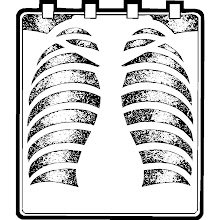